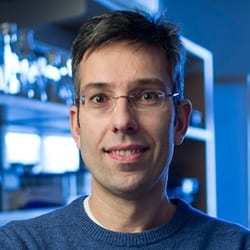 The shape of a bird’s beak or a whale’s flipper contains information not only about the organ’s function but also about its history. Similarly, information stored in DNA includes not only instructions about a cell’s function or how to turn a fertilized egg into an embryo, but also a record, imperfect to be sure, of the organism’s biological past, and its history of change and adaptation. Far from the prevailing notion of the genome as a “blueprint”, the DNA of any organism more likely resembles a continually edited palimpsest, assembled over 3.5 billion years, whose sequence of letters contains important clues to major organism features that are largely yet to be deciphered. In my laboratory at Vanderbilt University in Nashville, Tennessee, we study the DNA record to gain insight into the patterns and processes of evolution. We do so using both computational and experimental approaches to address three major and very broad questions: (1) how fungi evolved their remarkable metabolic capabilities, (2) how we can elucidate the tree of life using genome-scale approaches, and (3) how human pregnancy evolved.

I grew up in Elefsina, Greece, a small industrial town 15 miles northwest of Athens. I received my undergraduate degree in Biology from the University of Crete, Greece (1993-1998), which is where I got the bug to become an evolutionary biologist, and my PhD from Edinburgh University, Scotland (1998-2001), which is where I became one. I obtained further training, first as a postdoctoral fellow at the University of Wisconsin-Madison (2002 – 2005), and later as a research scientist at the Broad Institute (2005 – 2007), before arriving in Nashville and at Vanderbilt in the summer of 2007, where I am currently a Professor in the Departments of Biological Sciences and of Biomedical Informatics and a holder of the Cornelius Vanderbilt Chair in Biological Sciences.

I have co-authored more than 120 peer-reviewed scientific articles that have collectively received more than 11,000 citations. My work has been recognized by many awards, including a Searle Scholarship (2008), a National Science Foundation CAREER award (2009), a Chancellor’s Award for Research (2011), and an endowed chair (2013). Most recently, I was named a 2017 Blavatnik National Awards for Young Scientists Finalist. I also serve on the editorial boards of several journals including eLife, Current Biology, G3:Genes|Genomes|Genetics, BMC Genomics, BMC Microbiology, Evolution, Medicine & Public Health, Fungal Genetics & Biology, and PLoS ONE.

As a Guggenheim Fellow, I plan to write a book write a book that aims to introduce fungi and their amazing lifestyles to both biologists and the public but also to use them in a pedagogical way to promote an expanded view of evolutionary biology beyond the paradigms offered by the studies of the far better-known plants, animals, and bacteria.