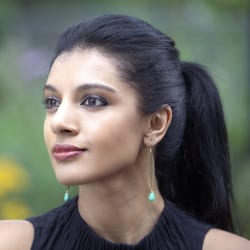 Described as “thrillingly three-dimensional… rapturous and profound” (The New York Times) and selected as one of Dance Magazine’s 25 to Watch for 2010, APARNA RAMASWAMY is Co-Artistic Director, Choreographer, and Principal Dancer of Ragamala Dance Company with her choreographic partner (and mother) Ranee Ramaswamy. As dancemakers and performers, their creative vision merges the rich traditions and deep philosophical roots of their Indian heritage with their hybridic perspective as first generation Indian-Americans.

Born in India and raised both in India and the United States, Aparna studies and performs in Chennai as senior disciple and protégé of legendary dancer/choreographer Alarmél Valli while building her own body of work as a dancemaker and performer in the U.S. This cultural hybridity has given her the perspective to approach Bharatanatyam as a living, breathing language through which to create works that speak to the contemporary experience.

Aparna is a recipient of a 2016 Doris Duke Performing Artist Award, a 2016 Joyce Award, a Bush Fellowship for Choreography, and three McKnight Artist Fellowships, among others. Her choreographic work is supported by the National Endowment for the Arts, National Dance Project, MAP Fund, New Music/USA, Doris Duke Foundation, McKnight Foundation, and USArtists International.

Most recently, she and Ranee were selected as Research Fellows by the Rockefeller Foundation Bellagio Center (Italy).

Aparna is currently regarded both in the U.S. and in India as one of the exemplary soloists in Bharatanatyam. Her solo work, presented with live music, has toured the U.S. and India with support from the National Dance Project and USArtists International.

In addition to their creative work, Aparna and Ranee are committed to inspiring a new generation to think and act innovatively, sparking conversations that articulate new possibilities for cultural hybridity in the 21st century. They have served as guest lecturers at colleges and universities throughout the U.S., and have been featured speakers and panelists for such forums as the Dance/USA National Conference, the International Festival of Arts & Ideas, and the Body Voices: Reimagining Culture, Community, and Politics conference hosted by NYU Abu Dhabi. Through the Ragamala School in Minneapolis, Aparna and Ranee have educated hundreds of students in the classical dance form of Bharatanatyam.

Aparna is an empaneled artist with the Indian Council for Cultural Relations (Government of India) and serves on the Board of Dance/USA. She has a B.A. in International Relations from Carleton College.