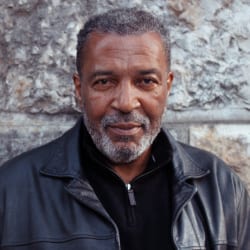 Born in Dallas in 1948, Billy Woodberry is one of the founders of the L.A. Rebellion  film movement. His first feature film, Bless Their Little Hearts (1984), is a pioneer and essential work of this movement, influenced by Italian neo-realism and the work of Third Cinema filmmakers. The film was awarded with an OCIC and Ecumenical Jury awards at the Berlin International Film Festival and was added to the National Film Registry of the Library of Congress in 2013.

“And When I Die, I Won’t Stay Dead, title lifted from a line in one of Kaufman’s poems, is director Billy Woodberry’s inspired, moving meditation on Kaufman’s work and legacy. A seamless marriage of director and subject, the film is not only scored by but also moves to the rhythms of jazz and is itself a kind of poetry. Fans of Woodberry’s masterful 1984 film Bless Their Little Hearts (selected for preservation in the National Film Registry) won’t be surprised at the taut intelligence and rich artfulness of And When I Die, in which the director upends many bio-doc conventions. He opens the film by dropping the viewer into Kaufman’s narrative at its boiling point – after he has already made waves and a name for himself in San Francisco’s fecund poetry scene of the mid-twentieth century.” -For CraveOnline, Ernest Hardy, 2016

He has also appeared in Charles Burnett’s When It Rains (1995) and provided narration for Thom Andersen’s Red Hollywood (1996) and James Benning’s  Four Corners (1998).

Woodberry received his MFA from UCLA in 1982 where he also taught at the School of Theater, Film and Television. Currently, he is a permanent faculty member  of the School of Film/Video and the School of Art at the California Institute of the Arts, where he has taught since 1989.