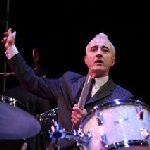 Bobby Previte is a composer and performer whose work explores the nexus between composed and improvised music. The New York Times writes that “Previte’s music is thoroughly, stubbornly and distinctly his own. The music copies nothing, and is utterly original.”  The New Yorker says, “His ensembles speak in visionary tongues.” And the Village Voice called him “A serious composer with the heart of a roadhouse rocker.”

He has received multiple awards for composition from the NEA, NYFA, NYSCA, the Jerome Foundation, Franklin Furnace, LMCC, New York State Music Fund, and the American Music Center. Mr. Previte has been an artist-in-residence at the Rockefeller Foundation Study Center in Bellagio, Italy, the Civitella Ranieri Colony in Umbertide, Italy, nine times at the MacDowell Colony, and at the Montalvo Arts Center in Saratoga, California.

His more than two hundred original compositions have been recorded and released on Sony, Elektra, Rykodisc, Palmetto, New World, Ropeadope, Thirsty Ear, and Tzadik. Leading a plethora of diverse ensembles from his instrument, the drums, he travels constantly, presenting his music at clubs, concert halls, and festivals with musicians from around the world.

Mr. Previte has collaborated with some of the leading lights in and beyond the world of music, from ensemble contractor for the premiere of John Adams’ I was Looking at the Ceiling at Lincoln Center, to composing and playing the signature bass marimba line on "Clap Hands" for rock icon Tom Waits’ groundbreaking Rain Dogs recording, to his appearances with William Shatner on Saturday Night Live, and as “The Drummer” in legendary filmmaker Robert Altman’s masterwork, Short Cuts. Previte’s music has been heard opening the New York Film Festival and in shows running at the Gershwin Theater on Broadway.

As an author he has written "Ching-Ching," a chapter in Renee Levine’s book Off Limits: Julius Eastman and His Music;  the popular essay “Ten Thoughts about Improvisation" for Adam Sliwinki’s blog, We are all going in different directions; the article "Jan Williams: Expect the Unexpected," for Drum Magazine; and the liner notes for the SONY reissue of Miles Davis’ classic In Concert, Live at Philharmonic Hall, NY.

The Separation, an examination of religion in society, scored for early music choir, pipe organ, and electric band. Based on both a re-arrangement of the 15th-century composer Guilliaume Dufay’s Missa Sancti Jacobi and a re-imagination of Olivier Messiaen’s La Nativité du Seigneur. It was co-commissioned by the Walker Art Center and Hallwalls Contemporary Arts Center and premiered at the Walker Art Center and Hallwalls in February 2007.

The 23 Constellations of Joan Miró, a commission from The City of Birmingham, UK, was scored for the Constellations Ensemble of eight musicians and conductor. After its U.S. première, on WYNC “New Sounds Live,” in October 2008 at the World Financial Center, New York, it was featured during tours of the United Kingdom and Italy.

Diorama is an ongoing performance piece/concert work, consisting of multiple solo drum concerts for only for one listener at a time whom the performer never sees.

Dialed In, a video/electronic drum duet with the video jockey Benton-C Bainbridge, has been performed at EMPAC, Eyebeam, and Lincoln Center.

In its review, Jazz Times effused, “He can break your heart with one cymbal crash.”