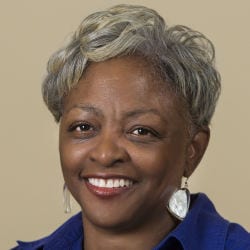 Carol Anderson, a historian, is the Charles Howard Candler Professor and Chair of African American Studies at Emory University. At the core of her research is how policy is made and unmade, how racial inequality and racism affect that process and outcome, and how those who have taken the brunt of those laws, executive orders, and directives have worked to shape, counter, undermine, reframe, and when necessary, dismantle the legal and political edifice used to limit their rights and their humanity.

She has, therefore, examined the dearth of human rights in the United States (Eyes Off the Prize), the strategies to delegitimize colonial empires (Bourgeois Radicals), the disastrous policy responses to African Americans’ political and economic advancement (White Rage), and the impact of voter suppression on American democracy (One Person, No Vote). Those studies have been supported by an array of grants and fellowships from the American Council of Learned Societies, the Ford Foundation, Harvard University’s Charles Warren Center, the Gilder Lehrman Institute of American History, and more. Eyes off the Prize received the Gustavus Myers Book Award and the Myrna Bernath Book Award. White Rage, a New York Times Bestseller and a New York Times Editor’s Pick, won the National Book Critics Circle Award for Criticism. It was also recognized as one of the best books of 2016 by the New York Times, the Washington Post, Boston Globe, St. Louis Post-Dispatch, and the Globe and Mail.

As a scholar whose work has public policy implications, she has served on working groups dealing with race and minority rights at Stanford’s Center for Applied Science and Behavioral Studies, the Aspen Institute, and the United Nations. She has appeared on The Rachel Maddow Show, PBS Newshour, and Democracy Now!, as well as providing commentary for the Huffington Post, The Guardian, New York Times, and Washington Post.

She is a Phi Beta Kappa graduate of Miami University, where she earned bachelor’s and master’s degrees in Political Science (International Relations) and History. She earned her Ph.D. in history from The Ohio State University.