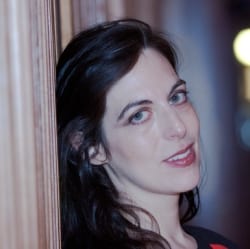 An internationally acclaimed composer, pianist and thereminist, Dalit Hadass Warshaw’s works have been performed by numerous orchestral ensembles, including the New York and Israel Philharmonic Orchestras (Zubin Mehta conducting), the Boston Symphony, the Cleveland Orchestra, the Houston Symphony, and the Grand Rapids Symphony.

After becoming the youngest winner of the BMI Award for an orchestral work written at the age of eight, Warshaw’s music has been widely praised for its lyricism, unique orchestral palette, distinctive harmonic vocabulary, sense of drama, emotional intensity and vivid portrayal of character.

As a pianist, Warshaw has performed widely as both soloist and chamber player, in venues as diverse as Avery Fisher Hall, Miller Theater, Alice Tully Hall and the Stone, her repertoire ranging from the piano concerti of Mozart, Schumann and Grieg to her own compositions and improvisations. She has soloed with the Rockland Symphony, Cheyenne Symphony, and the Misgav Chamber Players under the direction of Lukas Foss. In January 2015, she premiered Conjuring Tristan, her “narrative concerto for piano and orchestra,” with the Grand Rapids Symphony. She was described by the Grand Rapids Press as “a graceful and sensitive pianist [and] an intriguing orchestrator who draws a wealth of colors from an ensemble.”

Having studied theremin with the renowned Clara Rockmore from an early age, she has appeared as theremin soloist with the Boston Modern Orchestra Project, the New York Festival of Song, and the San Francisco Symphony. She has also performed with the New York Philharmonic, the Boston Symphony, the American Symphony Orchestra and the Royal Stockholm Philharmonic, among other ensembles. The San Francisco Chronicle wrote: “She played with unassuming grace … The music was unearthly … This is the kind of concert that 2013 was supposed to have ….”

Her CD, Invocations, was released in January 2011 and is available on Albany Records. Alongside works for solo piano and voice, this disc integrates the theremin with acoustic ensembles in ways that exhibit the more lyrical, vocal and expressive capacities of this unusual instrument, and that reveal its limitless ways of blending and interacting with different timbral combinations. On it, Warshaw performs on a unique and profoundly historical instrument: Clara Rockmore’s theremin, which was built and customized to her specifications by its inventor, Lev Termen, in the early 1930’s, and on which she last performed in 1993.

A full-time faculty member of the composition/theory department at the Boston Conservatory from 2004 to 2014, Warshaw obtained her doctorate in music composition from the Juilliard School, also teaching orchestration there from 2000 to 2005. Awards include five ASCAP Foundation Grants to Young Composers, a Fulbright Scholarship to Israel, a Charles Ives Scholarship from the American Academy of Arts and Letters, and two BMI Awards. Warshaw has held multiple residencies at the Yaddo and MacDowell Artist Colonies, and is a graduate of Columbia University and the Juilliard School. She currently teaches on composition faculty at CUNY- Brooklyn College.

While in Babylon for a cappella theremin choir (composed, performed and recorded by Dalit Hadass Warshaw)