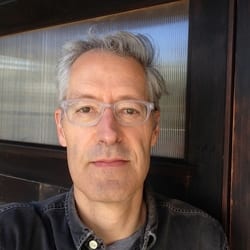 Dave Hullfish Bailey is an artist based in the San Fernando Valley of Los Angeles. His project-based works propose experimental geographies of specific sites— overlooked bits of infrastructure, spontaneous gatherings, inaccessible natural systems, and points of erased cultural meanings. Mixing granular description with nonlinear threads of connection, his work has one eye on unraveling the counter-narratives inscribed in each site; the other is trained on generating conceptual and poetic models for thinking about our relationships to distant sites, communities and non-human ecologies. Some recurrent forms in his work are sculptural installations, social interventions, photographs, drawings, artist books, collaborative workshops and performative lectures.

Bailey earned his BA in philosophy at Carleton College, and holds graduate degrees from Harvard Divinity School and Art Center College of Design. He attended the Skowhegan School of Painting and Sculpture. He teaches extensively in undergraduate and graduate art, architecture and public practice programs in the U.S. and abroad.