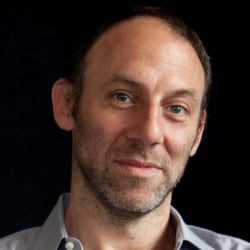 David Levine is an artist and writer primarily known for work that explores spectatorship, privacy, identity and labor through techniques of performance. He began as a theater director, directing plays and experimental works at New Dramatists, the Sundance Theater Lab, the Atlantic, Primary Stages, La MaMa, Dixon Place, and Soho Rep. In 2006 Levine began making work for museums and galleries, and has exhibited performance, video, and photography at institutions such as MoMA PS1, KW Institute for Contemporary Art, Fondation Cartier, Creative Time, REDCAT, MASS MoCA, the Museum of Fine Arts Boston, PS122, Gallery TPW, and the Museu Coleçao Berardo, and at galleries including Tanya Leighton, Berlin; Blum & Poe, Los Angeles; and Untitled, New York. His performance installation Habit, presented by PS122 and the Crossing the Line Festival, won an OBIE award in 2013. He has received fellowships and grants from the Kulturstiftung des Bundes, NYFA, the MacDowell Colony, the Watermill Center, the Radcliffe Institute for Advanced Study, and the Foundation for Contemporary Arts.

His work has been featured or reviewed in Frieze, Artforum, BOMB, the New York Times, The New Yorker, The Believer, PAJ, and Theater, among others, and his writing on performance, theater, and other matters has appeared in such publications as Triple Canopy, Parkett, Mousse, and Cabinet. Best Behavior, an anthology of his written work, will be published by 53rd State Press in Spring 2018. His Guggenheim project, Some of the People, All of the Time will launch in May 2018 with a solo exhibition at the Brooklyn Museum.

Formerly Director of Visual and Performing Arts at Bard College Berlin, he is currently Professor of the Practice of Performance, Theater, and Media at Harvard University.