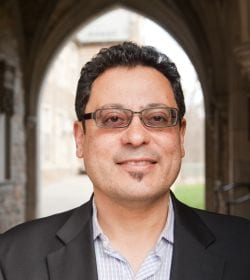 David Tavárez, a historian and linguistic anthropologist, is Professor of Anthropology at Vassar College. Currently a doctoral advisor at the Universidad Nacional Autónoma de México’s Graduate Program in Mesoamerican Studies, he also taught at Bard College (2000-03) and CIESAS-Mexico City (1999-2000). His research addresses the history of indigenous communities in Mexico with a focus on religion, evangelization and campaigns against idolatry, native authors and intellectuals, Mesoamerican calendars, and Nahua and Zapotec societies. Born and raised in Ciudad Juárez, Mexico, he attended Grinnell College, received his BA from Harvard College (1992) as a first-generation college graduate, and completed a combined PhD with distinction in history and anthropology at the University of Chicago under the direction of Friedrich Katz and Paul Friedrich (2000).

Tavárez is the author of The Invisible War: Indigenous Devotions, Discipline, and Dissent in Colonial Mexico (Stanford, 2011; Spanish-language version, 2012), editor of Words and Worlds Turned Around: Indigenous Christianities in Colonial Latin America (Colorado, 2017), and co-author of Painted Words: Nahua Catholicism, Politics, and Memory in the Atzaqualco Pictorial Catechism, with Elizabeth Boone and Louise Burkhart (Dumbarton Oaks, 2017), and of Chimalpahin’s Conquest: A Nahua Historian’s Rewriting of Francisco López de Gómara’s La conquista de México, with Susan Schroeder, Anne Cruz, and Cristián Roa (Stanford, 2010; Spanish-language edition, 2012). He has also published more than 40 peer-reviewed articles and chapters in subjects ranging from colonial race categories to ritual language. His work has been supported by the National Endowment for the Humanities (twice), the National Science Foundation, the Mellon Foundation, the École des Hautes Études en Sciences Sociales, the John Carter Brown Library, the Research Institute for the Study of Man, and the Foundation for the Advancement of Mesoamerican Studies.

Tavárez has been honored to deliver many invited lectures, including presentations for Indigenous activists at the Frente Indígena de Organizaciones de Base (Los Angeles), the José Martí Lecture at the College of the Holy Cross, an inaugural lecture on Guadalupe at the Houston Museum of Natural History, and lectures at Collège de France, La Sapienza Università di Roma, University of Leiden, Linnéuniversitet and various universities in the United States and Mexico. He has also served the profession as peer reviewer for 33 journals, 14 university presses, and science and humanities councils in the United States, Chile and Poland. Other duties include service as Councilor of the American Society for Ethnohistory and Chair of the Committee on Mexican Studies (CLAH).

His Guggenheim project rethinks the dynamics of religious and political dissent in colonial societies. It addresses an extraordinary corpus of more than 100 cosmological and divinatory manuals, and several ritual songs, all clandestinely produced in Zapotec by ritual specialists in seventeenth-century Mexico. His examination of this unique surrender, precipitated by the largest campaign against native idolatry in the colonial Americas, reassesses religious knowledge as mobilized political and historical consciousness. He is also at work on forthcoming projects on indigenous humanism, and on the writings of Nahua historian Chimalpahin.