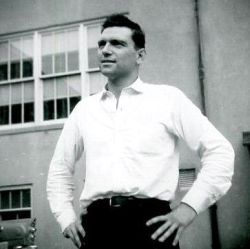 Born in Boston and a resident of New Jersey since 1958, Don Bloom is a fine artist and cartoonist who works in oils, watercolor, collage, ink, and a variety of mixed media. In his Artist’s Statement he writes: “I believe in color; luminous, glowing, spectral. With all due respect, long ago black and brown left my palette. My use of color is influenced primarily by Monet, Seurat, Bonnard, Cezanne, Van Gogh and early Vlaminck. Though, I’ve done thousands of drawings, the experience of putting down fresh pure pigment is totally invigorating. Warm vs. cold, singing and vibrating; on a canvas rectangular, diamond shaped or round, with or without a subject, color is my ‘Raison D’etre’ in painting.”

Bloom received his B.F.A. in 1953 from Massachusetts College of Art, and an M.F.A. in 1957 from Instituto Allende, in San Miguel, Mexico. He also earned teaching credits at Rutgers University School of Education, Kean College, and Jersey City State College. In 1960 Bloom received the Guggenheim Fellowship for Creative Painting, and in 1964 and 1965 he received the Huntington Hartford Fellowship.

Bloom served as an art educator in the Piscataway, New Jersey, Public School System from 1958 until 1992, when he retired. He was an Art Supervisor, Grades K-12, and for 17 of those years he served as the Chairman of the Art Department. He also served as an Instructor at Trenton State College. He served as an Editorial Cartoonist for Greater Media Newspapers from 1978-90. In the Suburban Newspapers of America’s annual journalism competition, he was selected twice for the national award, second place in 1985 and third place in 1988 in the category of Best Editorial Page Cartoon.

Bloom has been a professional caricaturist and illustrator from 1980 to the present. He was commissioned to do artwork for many cachets or “first-day covers”—miniature artwork that is on the envelope associated with a new stamp. He also illustrated Piscataway Story (1982), a two-volume workbook for children, authored by Margery Oleskie.

Bloom has had dozens of one-man shows and won national prizes for his paintings. His work has been selected for the Whitney Annual of American Painting, and appears in many prominent public and private collections, including the estates of Rod Steiger and Billy Rose. Ten of his editorial cartoons are in the permanent collection of the International Museum of Cartoon Art, Boca Raton, Florida. His first-day covers were displayed at the Baseball Hall of Fame in Cooperstown, New York. In 2010 he held a one-man show at the Triumph Brewing Company in Princeton, New Jersey.