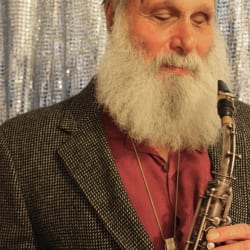 Earl Howard has been performing his compositions in the United States and Europe for over forty years. His recent compositions include music for live electronics, electronic tape music as well as music for electronics and instruments. Earl Howard’s method of creating orchestrated sounds with electronics and adding live, improvisational performance creates a unique, densely layered composition. Howard has performed at numerous venues including Merkin Hall, the Whitney Museum, The Kitchen, The Knitting Factory, Roulette, and Carnegie Recital Hall. In 2011 Earl Howard received a Guggenheim Fellowship. In 2004 his first sound installation was commissioned for the Tiffany Collection at the Queens Museum of Art. In the spring of 2003 Howard had a Regents Fellowship at UCSD. Howard received three New York Foundation for the Arts Fellowships. In 1998 Howard was the recipient of Harvard’s Fromm Foundation Commission. He graduated from California Institute of the Arts in Music Composition in 1974.

Recently Howard has performed frequently at UCSB, Roulette, the Herbst Theater, The Stone, and Merkin Hall with improvisers including; Georg Graewe, Mari Kimura, Mark Dresser, Anne LeBaron, Evan Parker, Thomas Buckner, and George Lewis. In 2005 he premiered a live improvisation with David Wessel at CINMAT in Berkeley, California. In 2006 he premiered Waftings in Grace Cathedral in San Francisco. In 2006 he was commissioned by the Donaueschingen Festival to produce a new ensemble work, Clepton. He also performed and composed for the Acoustmania Festival in Romania and Ulrichsberger Kaleidophon Festival 2006 in Austria. In 2007 Earl Howard was a special guest synthesizer performer and sound designer with the Perspectives Ensemble at the Miller Theatre and with the with Opera Omaha for Anthony Davis’s opera Wakonda’s Dream. In 2012 he premiered a composition made possible through his Guggenheim Fellowship “Superstring” in New York. This piece brought together musicians Wu Wei, Allan Jaffe, Miya Masaoka, Ernst Reijseger, Mark Dresser, Harris Eisenstadt, and Earl Howard.

Earl Howard’s compositions have been recorded by a number of musicians including Anthony Davis’ recording of “Particle W”, for piano and tape, released on the Gramavision label and Gerry Hemingway’s recording of “D.R. for Solo percussion” on the Auricle Record label. The recording, “Pele’s Tears” is from ten years of his electronic music on the Random Acoustics Label and “Fire Song” on Erstwhile Records with hyperpianist, Denman Maroney. “Strong Force” for ensemble and electronics was released on Mutable Music’s Label in the Spring of 2003. “Clepton” and “Granulary Modality” were recently released by New World Records.

Follow this link to view and download a concert created with the support of Earl Howard’s Guggenheim Fellowship.