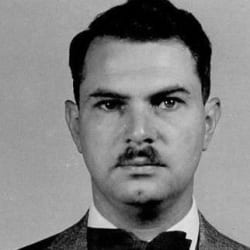 I was born in 1922 in Vienna, of parents from the Austro-Hungarian provinces. My education was interrupted by Adolf Hitler’s invasion in March 1938, quite literally speaking because my gymnasium was occupied by German troops. In the course of the next years, instead of pursuing formal studies, I crossed illegally into Czechoslovakia, was deported to Hungary by the newly independent Slovak state four months later, interned in a no-man’s-land camp between the two countries, fled to Prague, was flown to Paris and sent to South America where I remained during more than a decade. To hold body and soul together in Bolivia I worked as a construction worker, as an assistant to an archaeologist, a textile worker, a peddler, and a tin miner in Potosí. After moving to Chile I became a furrier and a foreign-language correspondent in an import firm. Unable to obtain permanent residency I traveled to Ecuador in 1945 where I found employment as a translator for the newly established United States Military Mission and later as a bookkeeper at a banana company.

In 1948 I was able to resume formal studies at the University of Cuenca. I was a well-read autodidact when I enrolled in its school of law, a field nearer to my interest in the humanities than the other two offered there, medicine and engineering. A period of applications to and rejections from universities all over the world followed. Luckily my distress signals reached the head of the German department at the Ohio State University, himself a writer and refugee from National Socialism. His intervention led to my employment as a teacher of German at Otterbein College and my acceptance as a student at Ohio State where I earned a bachelor’s and master’s degree. I completed my formal studies with a Ph.D. in German at the University of Washington in Seattle. My first full-time job was at Harvard, but it was at Washington University in St. Louis that I became a full professor and eventually the Rosa May Distinguished University Professor in the Humanities. I retired in 1993 but accepted temporary teaching positions elsewhere. All in all I held thirteen Visiting Professorships in Europe, America, and New Zealand.

In my early days of training the prevailing approach to literature was that of the New Criticism, which I soon abandoned for socio-historical literary studies more in keeping with my life experiences. I earned my scholarly credentials with a dissertation on Georg Christoph Lichtenberg, an eighteenth-century Enlightenment figure, and studies about Hofmannsthal and Calderón, the German Romantic Joseph von Eichendorff, and the Prague-born poet Rainer Maria Rilke, books that were accompanied by hundreds of articles. In the course of the years I developed an increasing desire to reach a wider audience by public lectures and essays, book reviews and poetry interpretations published in newspapers, and several book-length collections. But my best-known publication is my autobiography that appeared in Germany, twice in hard cover and once as a paperback. It was also published in the United States in English.

In retrospect I can say that I was treated badly during my youth in Austria. But historic changes also brought about changes in its official attitude. After the country regained its independence I was often invited as a speaker and Visiting Professor. The University of Vienna awarded me an honorary doctorate, I received various government decorations, and even an honorary high school diploma that had eluded me at the proper time. To be fair I have to add that my work was also recognized in other countries. I received honorary doctorates in Sweden and the United States and the literary prize of the city of Stuttgart.

I am very proud of and grateful for the award of a Guggenheim Fellowship at an early stage of my development. It strengthened my self-esteem and enabled me to study the interrelationship of two cultures in situ, Germany and Spain, which greatly expanded my intellectual horizon. As a result I have come to believe that support is most effective at a time when one has shown promise but has perhaps not quite earned such recognition.