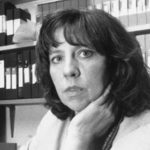 Elizabeth Barret is the producer/director of the acclaimed media production Stranger with a Camera, a personal and poetic interrogation of the documentary genre that raises far-reaching questions about what it means to take pictures.  Her place-based work is produced in association with the artist-centered organization Appalshop located in the Appalachian coalfields.  Barret is the recipient of a Rockefeller Foundation Film/Video/Multimedia Fellowship, NEA Southeast Media Fellowship, and Kentucky Arts Council Al Smith Fellowship in Media Arts.  Her work has been screened at venues worldwide and supported by the Andy Warhol Foundation for the Visual Arts, Ford Foundation, Independent Television Service (ITVS), Kentucky Foundation for Women, John D. and Catherine T. MacArthur Foundation, National Endowment for the Arts, NEH, Soros Documentary Fund, and others.  The award-winning Stranger with a Camera (2000), a self-reflexive exploration regarding issues of media representation, premiered at the Sundance Film Festival, was selected for PBS broadcast on the series P.O.V., and presented at 21C Museum, Anthology Film Archives, Film Streams cinema, Guggenheim Museum, MoMA, Museum of Fine Art, Houston, Pacific Film Archive, and Yerba Buena Center for the Arts, among other venues.  Barret currently serves as Director of the Appalshop Archive and coordinates international cultural exchange activities at Appalshop.

During the Fellowship period, Elizabeth Barret and Wendy Ewald are leading a creative collaboration in media and photography entitled Portraits and Dreams: A Revisitation.  Ewald began her early career working with students in rural Kentucky during 1975–1982. While making films exploring Appalachian themes, Barret worked with Ewald at the Kingdom Come School, one of the last one-room schools in Kentucky.  The photographs and writing resulting from those years was collected in the book Portraits and Dreams, published in 1985.

Portraits and Dreams: A Revisitation is a documentary project that combines new narratives and insights that grew out of Ewald’s pioneering practice in photography and collaborative art.   The project is following the process of re-engagement by Ewald and the students, now adults in their forties, who she taught in three public elementary schools in the Appalachian mountains.  As Fellows, Barret and Ewald are working with these former students to gather photographs they made in the intervening years as well as objects and audio-visual materials related to the process. The two artists are also seizing the opportunity to create new images, video, audio, and writing with project participants for eventual presentation and publication.

By reflecting on and further illuminating a collection of images made by children from a single locale, planning in this phase of the project for an installation will highlight the power of these unassuming photographs which continue to influence how those who have made and viewed them now see the world.  In the creation of this new work that draws on the former students’ shared experiences as children and adults, the artists with Guggenheim support are exploring the multiple meanings behind the photographs, what is revealed about the practice of collaborative art, and the relationship of images to personal memory across the passage of time.