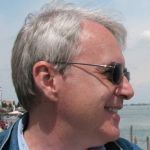 Greg Drasler lives and works in New York City. His paintings have been the subject of sixteen one-person exhibitions and included in over thirty group shows. He was born and raised in Waukegan, Illinois, and moved to New York in 1983 after receiving a M.F.A. from the University of Illinois, Urbana-Champaign.  The first exhibition of his paintings was in the first On View, at the New Museum of Contemporary Art in 1983, followed by Other Man : Alternative Views of Masculinity in 1987, both curated by Marcia Tucker.

Metaphorical depictions of construction sites and workers evolved in his work as accumulations of tools and objects populated his paintings that addressed the constructions of identity.  Crowds of men in hats along with the Baggage Paintings contained humor, nostalgia, and memory in ongoing assemblies of selves.   Drasler began describing his painting process as packing and re-packing an empty suitcase or painting the inside out.    These works were exhibited in solo and group exhibitions at the R.C. Erpf Gallery, New York; the Carnegie Museum of Art, Pittsburgh, Pennsylvania;  Artist Space, New York; and the Whitney Museum in Stamford, Connecticut, among others.

With the support of a New York Foundation for the Arts Fellowship in 1991 followed by a National Endowment for the Arts Fellowship in 1993 Drasler began Cave Paintings.   Through depictions of elaborately constructed interiors, paintings concentrating on refuge were posed as asylums or containers for a self.  The Queens Museum of Art  first presented Cave Paintings in 1994, followed by exhibitions in Boston, Seattle, and New York.

Drasler joined the Betty Cuningham Gallery in New York in 2007.  His most recent exhibition, titled On the Lam, traced his references from film production apparatus into auto interiors as places of independence, seclusion, and screening.  He characterized these paintings as “packed like luggage, appointed like rooms and driven like automobiles.” His current work, Road House, continues the use of assembly procedures in constructing patterned panoramas.  Cloud computations above planes of vivid crazy-quilt terrains contain structures suggesting vernacular American roadhouses as places between here and there.

Drasler’s essay “Painting into a Corner: Representation as Shelter” was published in The Vitality of Objects : Exploring the Work of Christopher Bollas,  edited by Joseph Scalia (Continuum Press, London; Wesleyan Press, 2002) and was followed by a collaboration with poet Timothy Liu titled  Plolytheogamy (Philadelphia: Saturnalia Press, 2009).  Drasler has taught and lectured at schools,  including Princeton University, Pratt Institute for the past nine years, Williams College, Hofstra University, and Montclair State University.  Reviews of Drasler’s work can be found in Art in America, New Art Examiner, Chicago Tribune, and  A.C.T. Gallery.