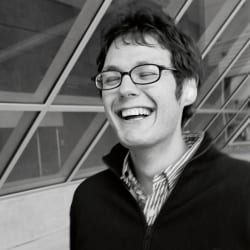 Ilya Kaminsky was born in Odessa, former Soviet Union in 1977, and arrived to the United States in 1993, when his family was granted asylum by the American government.
His new book, Deaf Republic, is a parable-in-poems, will be published by Graywolf Press in March 2019. The book opens when a boy is killed by soldiers breaking up the protest. The gunshot becomes the last thing the citizens hear–all have gone deaf, and their dissent is coordinated by sign language.

Kaminsky’s earlier collection of poems, Dancing in Odessa, was published by Tupelo Press and received international acclaim. “With his magical style in English,” stated the American Academy of Arts and Letters, “Kaminsky’s poems in Dancing in Odessa, seem like a literary counterpart to Chagall in which laws of gravity have been suspended and colors reassigned, but only to make everyday reality that much ore indelible. His imagination is so transformative that we respond with equal measures of grief and exhilaration.”

He has translated several books of poetry, most recently Dark Elderberry Branch: Poems of Marina Tsvetaeva, on which he collaborated with the poet Jean Valentine. His acclaimed anthology of 20th century poetry in translation, Ecco Anthology of International Poetry, published by Harper Collins, was called “a modern classic,” and is taught in universities around the world. Kaminsky’s poems have been translated into numerous languages and his books have been published in many countries including Turkey, Holland, Russia, France, Mexico, Mecedonia, Romania, Spain and China, where his poetry was awarded the Yinchuan International Poetry Prize.

Profile photograph by Cybele Knowles, 2013, courtesy of The University of Arizona Poetry Center.