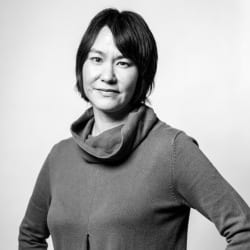 Joan Naviyuk Kane is Inupiaq with family from King Island (Ugiuvak) and Mary’s Igloo, Alaska. She was raised in and attended public school in Anchorage, where she currently raises her sons. Kane graduated with honors from Harvard College, where she was a Harvard National Scholar, and Columbia University’s School of the Arts, where she was the recipient of a graduate Writing Fellowship. Her books include The Cormorant Hunter’s Wife (2009), Hyperboreal (2013), The Straits (2015), Milk Black Carbon (2017), and Sublingual (2018).

She has received the John Haines Award (2004), Rasmuson Foundation Individual Awards (2007, 2016), the Whiting Writer’s Award (2009), the Connie Boochever Fellowship from the Alaska Arts and Cultures Foundation (2009), a National Native Creative Development Program Award from the Longhouse Education and Cultural Center (2009), the Anchorage Museum Theatre Script Contest (2009), and was a finalist for the 2009 Poetry Foundation’s Ruth Lilly Fellowship. Kane received the 2013 Native Arts and Cultures Foundation National Artist Fellowship, the 2013 United States Artists Foundation Creative Vision Award, the 2013 Rasmuson Foundation Artist Fellowship, the 2014 Alaska Literary Award, and the 2016 Aninstantia Foundation Fellowship. In 2014, she was indigenous writer-in-residence at the School For Advanced Research, was Tuttle Creative Residency Fellow at Haverford College and a Fellow at the Hermitage Artist Retreat in 2016, and, in 2017, was a Lannan Foundation Residency Fellow and a judge for the awards of the Griffin Poetry Prize.

Her poems have been anthologized widely, including Best American Poetry, Hick Poetics, Read America(s), Syncretism & Survival: A Forum on Poetics, Monticello in Mind, and elsewhere, and new poems have recently appeared or are forthcoming in Pinwheel, Arkansas International, and Boston Review. Her essays have recently appeared or are forthcoming in Sustenance: Writers from BC and Beyond on the Subject of Food, The Poem’s Country: Place & Poetic Practice, and 21|19: Readings in Proximity. Kane will focus her Guggenheim Fellowship year on research and writing related to the role Alaska assumed in national and world dynamics during the Cold War era, and will write toward a contemporary Inupiaq understanding of the historical prominence of the arctic in geopolitical terms, which shall be subsumed or re-contextualized in her creative work, including a poetry collection titled Dark Traffic, and a chapbook of selected prose with Albion Books. She has taught in the low-residency MFA program in writing at the Institute of American Indian Arts in Santa Fe, New Mexico, since January 2014.