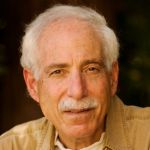 After three years on the USS Forrestal in the Mediterranean and four more at Harvard for his Ph.D., John Felstiner came to Stanford in 1965. His first book, The Lies of Art: Max Beerbohm’s Parody and Caricature (1972), has to do with parody as a critical, creative, and comic form. Since then his teaching and writing have dealt mainly with modern poetry. Teaching North American poetry in Chile in 1967-68 led to Translating Neruda: The Way to Macchu Picchu (1980), which won the Commonwealth Club of California Gold Medal, and to an ongoing concern with the practice of literary translation, along with its interpretive and theoretical implications. The British Comparative Literature Association gave 1st and 2nd prizes to his Pablo Neruda and Paul Celan translations.

During the 1970s John developed critical approaches to poetry by civilians and soldiers from the Vietnam era, and after teaching at the Hebrew University in Israel (1974-75), he began studying the literature, art, photography, and music that emerged from the European Jewish catastrophe. His book on the German-speaking Jewish poet, Paul Celan: Poet, Survivor, Jew (1995), was a Finalist for the National Book Critics Circle award and the MLA’s James Russell Lowell prize, and won the Truman Capote Prize for Literary Criticism.

John co-edited a Norton anthology of American Jewish literature (2000). In addition to his Guggenheim Fellowship, he has held Rockefeller, NEH, and NEA fellowships, and is a member of the American Academy of Arts and Sciences.

For his current book, Can Poetry Save the Earth?: A Field Guide to Nature Poems, on poetry and environmental urgency (http://yalepress.yale.edu/yupbooks/book.asp?isbn=0300137508), he has worked at the Stanford Humanities Center and the Yaddo, Macdowell, Millay, Djerassi, Mesa Refuge, and Jentel artists colonies. During 2007, American Poetry Review ran six essays from this book, which Yale University Press published in Spring 2009. Poets House in Manhattan is focusing on his book and its theme, beginning in October 2009. NPR’s Morning Edition featured the book: http://www.npr.org/templates/story/story.php?storyId=102795472

“This Dust of Words,” John’s memoir of his brilliant late-Sixties student Liz Wiltsee, inspired a documentary film that is being screened at various festivals: thisdustofwords.com