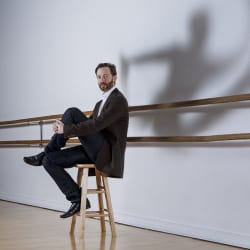 Originally from Anchorage, Alaska, John Heginbotham is a Brooklyn-based choreographer and performer. John graduated from The Juilliard School in 1993 with a BFA in Dance, and was awarded the Martha Hill Prize for Sustained Achievement in Dance. He subsequently performed in the work of Pam Tanowitz, John Jasperse, Rebecca Stenn, Janis Brenner, Allison Chase, David Neumann, Ben Munisteri, Stanley Love, Vanessa Walters, and Pilobolus Dance Theater, among others. From 1995-1998, he was a member of Susan Marshall & Company, originating roles in her evening-length works The Most Dangerous Room in the House and the award-winning dance opera composed by Philip Glass, Les Enfants Terribles.

John was a member of the Mark Morris Dance Group (MMDG) from 1998-2012, performing lead roles in L’Allegro, il Penseroso, ed il Moderato; The Hard Nut; Four Saints in Three Acts; and Romeo and Juliet: On Motifs of Shakespeare. During his time with MMDG, he toured across the United States and abroad with artists including Mikhail Baryshnikov, Yo-Yo Ma, Emanuel Ax, The Bad Plus, and Zakir Hussain, and performed with opera companies including The Metropolitan Opera, New York City Opera, and English National Opera.

In 2011, John founded Dance Heginbotham (DH), a performance group devoted to the presentation of his dance and theatrical work. The company had its world premiere in January 2012 on the Millennium Stage at The John F. Kennedy Center for the Performing Arts and has since been presented and commissioned by Bard College, Baryshnikov Arts Center, Black Mountain College Museum + Arts Center, Brooklyn Academy of Music, Duke Performances, Jacob’s Pillow Dance Festival, The Joyce Theater, Lincoln Center for the Performing Arts, Lower Manhattan Cultural Council, the Metropolitan Museum of Art, ODC Theater, and Vail International Dance Festival, among others.

In the Spring of 2016, DH traveled to Indonesia, Laos, and the Philippines as part of DanceMotion USASM, a cultural diplomacy initiative of The US State Department, produced by the Brooklyn Academy of Music. DH celebrated its 5th Anniversary in February 2017, at The Kennedy Center with the world premiere of Lola, commissioned by The Kennedy Center and the National Symphony Orchestra, and performed with the world-renowned violinist Joshua Bell. In August 2017, DH premiered The Principles of Uncertainty, a new evening-length collaboration with artist/author Maira Kalman, which toured throughout the United States and abroad.

In addition to his work with DH, John is active as a freelance choreographer. Select projects include First for Juilliard Dance: New Dances 2016, Angels’ Share for Atlanta Ballet (2014), and Isaac Mizrahi’s Peter & the Wolf for Works & Process at the Guggenheim (2013), which has become an annual holiday event. John’s work has been featured in the music videos of Fischerspooner and NICKCASEY, and in the live performances of cabaret artists Lady Rizo and Our Lady J. John choreographed Daniel Fish’s acclaimed production Oklahoma! (2015), which was commissioned and produced by Bard College, and will run at St. Ann’s Warehouse in Brooklyn, NY in Fall 2018.

John’s growing list of opera commissions include John Adams’ Girls of the Golden West at San Francisco Opera, directed by Peter Sellars (2017); Candide with the Orlando Philharmonic (2016); The Magic Flute at the Opera Theatre of Saint Louis, directed by Isaac Mizrahi (2014); Handel’s Alceste for the American Classical Orchestra (2014); Macbeth for the Manhattan School of Music’s Opera Studies Department (2014); and Maria de Buenos Aires at the Cork Opera House (2013).

As a teacher, John offers dance master classes in the United States and abroad. In college and university settings, he has taught and created work for Barnard College, George Mason University, The Juilliard School, The Laban Centre (London), Long Island University, Purchase College, Princeton University, University of California – Berkeley, University of Illinois – Urbana-Champaign, the University of Massachusetts – Amherst, and the University of Washington. John is currently on faculty at Dartmouth College, where he also is the Director of the Dartmouth Dance Ensemble. He is a founding teacher of Dance for PD®, an ongoing collaboration between the Mark Morris Dance Group and the Brooklyn Parkinson Group.