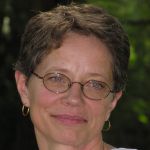 Joyce Flueckiger is a professor in the Department of Religion at Emory University. She specializes in performance studies, anthropology of religion, and religions of South Asia, with a particular focus on gender. As the daughter of Mennonite missionaries, she grew up in India until the age of eighteen. She returned to the U.S. to attend Goshen College, where she received her B.A. in English; she earned her Ph.D. in South Asian language and literature from the University of Wisconsin, Madison.

Flueckiger has conducted three major fieldwork projects in India that have resulted in full-length monographs: Gender and Genre in the Folklore of Middle India (1996), In Amma’s Healing Room: Gender and Vernacular Islam in South India (2006), and When the World Becomes Female: Guises of a South Indian Goddess (2013). The first book is situated in rural and small-town Chhattisgarh (central India), the second further south in the large urban center of Hyderabad, located on the Deccan Plateau, and the third still further south in the Hindu pilgrimage town of Tirupati. She is currently completing a textbook titled Everyday Hinduism  for a Wiley-Blackwell series on Everyday Religion, which focuses on contemporary Hindu practices from an ethnographic perspective.

While the content and geographic/cultural locations of Flueckiger’s major research projects to date are very different, they share theoretical interests in indigenous categories and in everyday, vernacular religion. One of the primary purposes of Flueckiger’s research is to bring unwritten traditions into the mainstream of the study and teaching of religion, with a particular emphasis on their gendered performance and experience, extending the boundaries of and voices included in the traditional academic study of religion. Each book has analyzed a repertoire of performance and ritual traditions, placing them in relationship to each other as contexts that affect how they are received by their performers and audiences.

Flueckiger’s Guggenheim project, Material Acts: The Agency of Materiality in India, follows this trajectory of emphases on repertoire and indigenous categories. The goal of the project is to articulate an indigenous Indian theory of the agency of materiality through performative and ethnographic analyses of a range of different kinds of material that are not usually included in the study of religion. The title, Material Acts, plays off J. L. Austin’s term “speech acts”—utterances that do something rather than simply convey information. Flueckiger’s assumption, shared with performance studies scholars regarding ritual and narrative performance, is that material objects do not simply reflect preexisting ideologies and identities, but that they create meaning, identity, theology, transformation—they do something. Indian traditions emphasize the agency (ability to act) of many forms of material, without dependence on human intervention or intention (although, of course, humans often have their own intentions in relationship to the same materials). The project will analyze five different forms of materiality in specific ethnographic contexts: festival male-to-female guising/dress (vesham), ornaments (focusing on the Indian wedding necklace, tali); ritual materials (flowers, fruits, new cloth, etc.) that themselves help to create the goddess of wealth/abundance Lakshmi; Chhattisgarhi cement forms of the demon Ravana in the epic of the Ramayana whose material presence creates alternative theologies; and small cement shrines built over village goddesses (in Hyderabad) that transform the identities of those housed in their interiors. The communities Flueckiger has worked in are very explicit about the creative/transformative power of the first three forms of material; using this view of materiality as a lens, she will analyze the creative potential of the last two forms, whose agency is less explicitly articulated. The guiding questions of her project ask: how/when does materiality exert agency and what/how does it create?