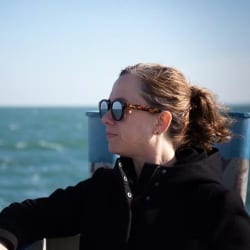 Julia Christensen is an artist and writer whose work explores systems of technology, memory, time, and change. Her work has been exhibited at the Walker Art Center (Minneapolis, MN), Ronald Feldman Gallery (NYC, NY), Eyebeam (NYC, NY), Museum of Contemporary Art Cleveland (Cleveland, OH), Carnegie Museum of Art (Pittsburgh, PA), and internationally in France, Greece, Finland, and beyond. A current project, “Past Lives,” about technological obsolescence in institutional architecture, will premiere at the Los Angeles County Museum of Art (LACMA) in the fall of 2018. Through the LACMA Art + Tech Lab, Christensen is in dialog with scientists at NASA’s Jet Propulsion Lab to make art about a potential future space mission to Proxima b, a planet in the Alpha Centauri star system, 4.2 light years away.

Christensen is the author of Big Box Reuse (MIT Press, 2008), about the civic reuse of abandoned Walmart and K-mart stores in the United States. Big Box Reuse won several prestigious book awards, and was listed in 2009 as “Best of Trade Non-Fiction” and “Best Cover and Jacket Design” by the Association of American University Presses and the New England Book Show. Her writing has appeared in a range of publications, such as Print, Architect, Hyperallergic, and Cabinet magazines. She is at work on her second book, currently titled Upgrade Available, which includes artwork and writing about her ongoing investigation into how “upgrade culture” impacts archives, institutions, scientific research, and our personal lives.

Christensen’s writing and artwork have been reviewed in publications such as The New York Times, Bookforum, The New York Review of Books, Village Voice, Art in America, Afterimage, Afterall Journal, Dwell, and USA Today. She has been an invited guest on many radio shows featuring her artwork, such as All Things Considered (NPR), On Point (NPR), and Marketplace (CBC). Her work has been included in the “Highbrow and Brilliant” quadrant of New York Magazine’s “Approval Matrix,” Make Zine once said that “Christensen’s work is a stunning demonstration of the tremendous potential for creative expression using technologies we might otherwise throw away,” and The Washington Post once said that “Christensen has seen the future.” She has spoken widely about her work at a range of venues, including Yale University, Columbia University, Georgia Institute of Technology, Carnegie Mellon University, Urban Land Institute’s National Conference, Idea Festival, National Arts Club, and Machine Project.

Christensen is a 2017-2018 fellow at the LACMA Art + Tech Lab. She is a recipient of the Creative Capital Fellowship (Emerging Fields, 2013), the MacDowell Fellowship (2015), the Ohio Arts Council Individual Excellence Award (2015), and the SPACES R + D Award (2017). She has received commissions from Turbulence and New Radio/ Performing Arts. She has been awarded artist residencies at the MacDowell Colony, Wexner Center for the Arts Film + Video Studio, and the Experimental Television Center. Her public art works have been commissioned by LAND studio (Cleveland, OH) and Artisphere/City of Arlington (Arlington, VA).

Christensen is Associate Professor of Integrated Media in the Studio Art Department at Oberlin College. She previously taught at Stanford University, California College of the Arts, and State University of New York Albany. Christensen received her BA in Integrated Art at Bard College, MFA in Electronic Music and Recording Media at Mills College, and MFA in Integrated Electronic Arts at Rensselaer Polytechnic Institute.