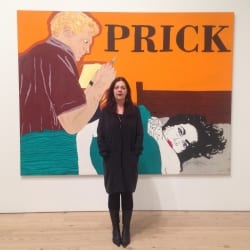 Kathe Burkhart is an interdisciplinary artist and writer. Working since the early ‘80s, Kathe Burkhart has consistently and frankly engaged gender roles, sexuality, celebrity, and language in an interdisciplinary practice. Her Liz Taylor Series uses Pop Art imagery and assemblage to critique representation and the sexual politics of identity. Her visual art has been widely exhibited nationally and internationally, including the Whitney Museum, Venice Biennale, PS1 Contemporary Art Center/MoMA, Kunsthalle Fribourg, the New Museum, Brooklyn Museum, Weatherspoon Museum, Neuberger Museum, Banff Centre for the Arts (Canada) SMAK Museum, (Gent, Belgium) FlashArt Museum, Galleria d’ Arte Moderna, Bologna (Italy) and the Groningen, Zwolle and Helmond Museums (Netherlands) among many others. She has had 44 solo exhibitions, among them NYU’s 80WSE, Participant Inc., Alexander Gray, Mitchell Algus Gallery, Schroeder Romero Gallery, and Feature Inc., NYÇ. Her works are included in the collections of the Whitney Museum of American Art, the Art Institute of Chicago, the Stedelijk Museum, Amsterdam, among others. She is represented by Galerie Lumen Travo, Amsterdam.

She is the author of four books of fiction, Dudes, 2014, Participant Press, NYC; Between the Lines, Hachette, Litteratures, January 2005; Deux Poids, Deux Mesures (The Double Standard) Participant Press 2005 and Hachette Litteratures, Paris, 2002, and From Under the 8 Ball, (LINE, 1985). She has been anthologized in Writers Who Love Too Much (NY: Nightboat Press, 2017) among others, and has also been published in Evergreen Review, Esopus, Women and Performance, Cultural Politics, Purple Fiction, FlashArt, High Performance, and East Village Eye among others. Regency Arts Press published a monograph, The Liz Taylor Series: The First Twenty Five Years in 2007.

She was a faculty member at New York University for many years and is currently a visiting artist at HISK, Ghent, Belgium.