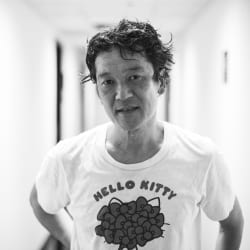 Born in Niigata, Japan, Kota Yamazaki was first introduced to butoh under the teaching of Akira Kasai at the age of 18, and graduated from Bunka Fashion College with BA in Fashion Design. Yamazaki was invited to work with Daniel Larrieu at CNDC in 1989 in Angers, France and was introduced to Avignon Festival and the Nouvelle Danse for the first time. In 1994, Yamazaki became a finalist in the platform of Bognolet choreographic competition (the International de Bagnolet Councours) in France for his second choreographic work Reflection.

Yamazaki is a recipient of The New York Dance and Performance Awards (the Bessie Award) of 2007, Foundation for Contemporary Arts Grant award of 2013, NYFA Fellowship of 2016, and two-time The Herb Alpert Award nominee.Throughout these years, Yamazaki has been teaching at universities and for local communities as Guest Faculty around a world, and organizes Whenever Wherever Festival since 2009 as Director of Body Arts Laboratory, the first artist-run organization for dance artists in Tokyo.

Artist Statement
As a dance artist who carries the spirit of butoh, I believe my works are deeply rooted in Japanese tradition, while at the same time explores a new way to internalize varying cultures and states. Different from fusing or mixing forms, my goal is to find an ‘inter-being-ness’ of different cultures, bodies, and perspectives. I am interested in creating an alternate space where different bodies can co-exist. And I think I’m interested in seeing the world in a kinder and softer light rather than as an assemblage of clearly separated fragments that come with specific names and classifications, and want to believe that this way of working with disparate bodies can offer a new way of looking at and unifying the divided world we live in.