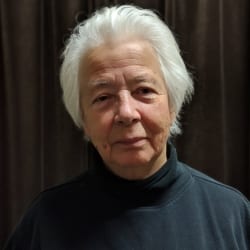 As a daughter of missionary parents, Marsia Alexander-Clarke was born and raised in Valparaiso, Chile. She came to the United States to attend high school in 1952 and has remained in the United States since that time.

For several years, Marsia spent extensive time in wilderness areas of Europe, Africa, Australia, New Zealand and also Chile and Argentina. Along with her early experiences in Chile, these travels have greatly influenced her work.

Prior to her work in video, Alexander-Clarke developed a extensive body of work in painting and later in sculpture. After receiving her MFA from Claremont Graduate University she was accepted at McDowell Colony, Peterborough, New Hampshire, for a two-month scholarship residency.

In the late 1980’s, Marsia Alexander-Clarke attended video art and poetry workshops and was an active participant in Studio X productions at the Pasadena Community Access Corporation in Pasadena, California. Since then she has worked with video as her primary medium. Influenced by her experiences with minimalism in both painting and music, Alexander-Clarke developed video work with small fragments of recorded material which she calls marks in loose reference to the marks in drawing and painting.

In 2001, she received an Individual Artist Grant from the City of Pasadena Cultural Affairs Division and the Pasadena Arts Commission for her choral video installation, 6 in 1 to 64 CHOIR. This work was exhibited at the Armory Center for the Arts in Pasadena, California.

For her project Marsia will be composing a new video symphony inspired by phrases from Pablo Neruda’s Veinte Poemas de Amor y una Cancion Desesperada. A separate choral video will accompany this work.

I call my video – video as mark – in loose reference to the marks found in drawing and painting. In using video marks I build a language that extends the aesthetics of paining, forming a bridge between painting and music through the addition of movement. Repeating and overlapping sounds expands this visual language into word/sound pieces.

I create my video marks by selecting short portions of recorded video material and extensively cropping them to form narrow cells that contain only a small portion of the colors, textures and movement of the recorded landscape. The play of light on plants give each mark a suggestive uniqueness. I place a selected mark in a field of color. Its relationship to space is important. Attention to the placement of each mark and its relationship to others, their duration and their progression through time is carefully considered. Since my compositions deal with geometrical forms, the rectangular format of the screen is integral to the work. I often work with multiple channels composed into video installation.

I hope to convey a non-verbal sensation of grandeur paired to a sense of intimate silence. This is a sensation I experienced walking alone in the wilderness while traveling for a year in western Australia. It is a sensation similar to the half empty space of the large Romanesque church I attended in my childhood in Chile, South America. Yet my restless self also seeks disruption; to create something new and unexpected.

Between mind and experience, my work exudes an enlarged and deeply felt sense of Being. In an environment which has a predilection for information, answers, and materiality, it is imperative to our well being as individuals and as a nation, to reach below the skin of the present day’s fascination with surface and to attend to soul.