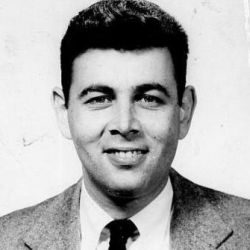 Martin Block’s researches in high-energy physics have produced a number of important advances in the field. While completing his studies in physics at Columbia University (Ph.D., 1951), he helped design the magnet for its Nevis Cyclotron, the highest energy accelerator at the time, and as an Assistant Professor at Duke University his group created the first liquid helium bubble chamber.

It was during his tenure at Duke while attending a 1955 physics conference in Rochester, New York, that he first tentatively challenged the parity rule that was generally accepted theory but unproven experimentally, and suggested that nonparity in weak interactions might explain the τ-θ puzzle. As a relative tyro at the conference, he was hesitant to broach his idea to the attendees, who included the likes of Tsung-Dao Lee, and future Guggenheim Fellows Chen Ning Yang (1962) and Murray Gell-Mann (1971). Fortunately, his roommate at the conference, Richard Feynman, was intrigued enough by the possibility of nonparity that he willingly voiced Mr. Block’s idea to the gathering. Although his idea was initially scoffed at, he was later proved right. In fact, his theory formed the basis for the work that earned Lee and Yang their 1957 Nobel Prize in physics.

His Guggenheim Fellowship allowed him to delve further into these lines of investigation, as he used the liquid helium bubble chamber to study elementary particles and hyperfragmentation, including charge independence, charge symmetry, and the parity of K-mesons; using data from bubble chamber research that he brought with him on his Fellowship term in Europe, he and scientists at the Instituto di Fisica “A. Righi” at the University of Bologna found the first example of the leptonic decay of a positive Sigma hyperon, which required modification of existing theory.

In 1961 he left Duke to take up a position as Professor of Physics at Northwestern University, where he remained for the rest of his career. While there, he expanded his repertoire of techniques to include large spectrometer counter and spark chamber systems, which he studied while a Ford Foundation Fellow at CERN in 1964-65, the same year he received Fellowships from NATO and UNESCO; his work at CERN using a heavy liquid chamber to measure neutrino interactions was the first of its kind. Continuing his record of achievement in physics during this decade, he was the first to measure the relative parity of two strange particles, determining that the λ°-K° parity is odd. In the 1970s his interests shifted to counter techniques used in measuring high-energy scattering cross sections, which he studied at both the Brookhaven National Laboratory and as a Fellow in the lab of Guiseppe Cocconi at CERN.

In 1984, Mr. Block founded the Winter Conference Series at the Aspen Center for Physics; ten years later the Center honored him with an award for establishing the series, which is still going strong. His other accolades include the Medal of the Italian Physical Society (1985); a symposium on weak interactions at the University of Pavia, Italy, organized in his honor, as well as that university’s Medaglia Teresiana, a medal awarded only three times since World War II; and a symposium at Northwestern University in 1996 celebrating his forty-five years in physics.

Now Professor Emeritus of Physics at Northwestern, Martin Block continues to make important contributions to his field. In 2010 alone his important articles include “Decoupling the NLO Coupled DGLAP evolution equations: an analytic solution to pQCD,” in The European Physical Journal C; “Hadronic cross sections: from cyclotrons to colliders to cosmic rays,” a paper he presented at the 2010 International Symposium on Very High Energy Cosmic Ray Interactions held at FermiLab; and his brief report “Ultrahigh energy neutrino scattering: an update,” which appeared in Physical Review D. In 2011, sixty-two years after his first article appeared in Physical Review D, that prestigious journal published two more: “Forward hadronic scattering at 7 TeV: Predictions for the LHC: An Update” (with Francis Halzen), and “An analytic solution to LO coupled DGLAP evolution equations: a new pQCD tool” (with Loyal Durand, Phuoc Ha, and Douglas W. McKay).