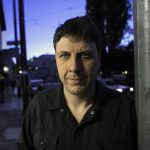 Matthew Zapruder is the author of three collections of poetry. His most recent book, Come On All You Ghosts (Copper Canyon), was selected as one of the year’s top five poetry books by Publishers Weekly, as well as the 2010 Booklist Editors’ Choice for poetry, and the 2010 Northern California Independent Booksellers Association poetry book of the year. His second collection, The Pajamaist, was selected by Tony Hoagland as the winner of the William Carlos Williams Award from the Poetry Society of America, and was chosen by Library Journal as one of the top ten poetry volumes of 2006. His first book, American Linden, was the winner of the Tupelo Press Editors Prize, and was published by Tupelo in 2002.

He is also co-translator from Romanian, along with historian Radu Ioanid, of Secret Weapon: Selected Late Poems of Eugen Jebeleanu (Coffee House Press, 2007). German and Slovenian language editions of his poems have been published by Luxbooks and Serpa Editions; in 2009, Luxbooks also published a separate German language graphic novel version of the poem "The Pajamaist." A collaborative book with painter Chris Uphues, For You in Full Bloom, was published by Pilot Press in 2009.

His poems, essays, and translations have appeared in many publications, including Open City, Bomb, Slate, American Poetry Review, Poetry, Tin House, Harvard Review, Paris Review, The New Republic, The Boston Review, The New Yorker, McSweeney’s, The Believer, Real Simple, and The Los Angeles Times. His work has also appeared in many anthologies, including Third Rail: The Poetry of Rock and Roll; Legitimate Dangers: American Poets of the New Century; Seriously Funny: Poems about Love, Death, Religion, Art, Politics, Sex, and Everything; and Best American Poetry 2009.

In addition to his Guggenheim Fellowship, his awards include  a Lannan Literary Residency in Marfa, Texas, and the May Sarton prize from the American Academy of Arts and Sciences. He has taught at New York University, The New School, the University of Houston, St. Mary’s College of California (as Poet in Residence), and at the University of California at Berkeley as the 2010 Holloway Lecturer in the Practice of Poetry. Currently he works as an editor for Wave Books, and teaches as a member of the core faculty of UCR-Palm Desert’s Low Residency MFA in Creative Writing. He lives in San Francisco.