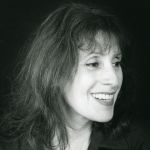 I grew up in California and received a B.F.A. from the California Institute of the Arts. In the late seventies I moved to New York and have been represented by Ronald Feldman Fine Arts Gallery since 1985. I have exhibited both nationally and internationally, received two National Endowments of the Arts awards, an Anonymous Was a Woman grant, and the Jennifer Howard Coleman Distinguished Artist in Residence Grant in Painting from Otis College of Art and Design that produced a catalogue. Rizzoli International Publications published a hardbound monograph of Front Pages, a project I completed in 1996. Using rubber stamps and pastels I editorialized each front page of the New York Times for the entire year.

I am a content-driven artist. My narrative paintings are concerned with political, sociological, cultural references, many mingled with humorous commentary and biting critique. My process varies with each series; however, my studio practice seem to remain the same, baroque labor-intensive copying, cutting, pasting, and composing appropriated images to tell the story. I have become a chronicler of the times, keeping myself informed along with anyone else who is curious and a news junkie.

Towards the last part of Michael Moore’s Bowling for Columbine, Professor Barry Glassner talks abut his book A Culture of Fear. He discusses real and imagined fears of minorities, welfare mothers, kidnappings, etc. The media has always played to our fears as a motivation for watching the 11:00 news. Everyone is familiar with such attention getters such as “Don’t go near a swimming pool before seeing this next report” or “No woman over 40 can afford to miss our next segment." After 9/11 their sense of restraint vanished along with a lot of common sense. We were now exposed to nonstop new fears ranging from the innocuous, to the slightly ridiculous, followed closely by the completely inane and lastly by the totally hilarious. Only on rare occasions was this drivel interrupted by relevant and poignant dangers. Listening to all this noise, and not being Jon Stewart, I decided that the only way to maintain any level of sanity in this age of absurdity was to restage the old nursery story of the paranoid fowl who rashly jumped to false conclusions that the sky was falling when an acorn hit her head. She alarmed all her friends that the world was ending. While on their way to alert the king, Foxy Loxy promising them safety, lured the group into his den and consumed them.

I began Chicken Little and the Culture of Fear in 2003 and to date have completed six of eleven scenes. These 6 scenes–The Garden, The Bathroom, The Kitchen, The Bedroom, The Road and The ER–contain 296 canvasses in varied sizes and more than 3,000 individually mixed colors. There are five more scenes to complete: The Main Hospital, The Diner, Poor Town, and Fox News, and an additional scene, The Jail, which I plan to complete towards the end of the project so it will be timely. The entire project will be exhibited upon its completion at Ronald Feldman Fine Arts Gallery in New York, hopefully in five or six years.