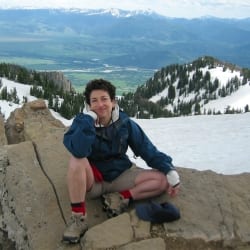 Naomi Oreskes is Professor of the History of Science at Harvard University and the author of nearly 200 books, scholarly papers, and popular articles on science, technology, and public affairs. Her opinion pieces have appeared in major newspapers around the globe including The New York Times, The Washington Post, The Los Angeles Times, The Times (London). Nature, Science, The New Statesman, Frankfurter Allgemeine, and many others. Since 2015 has been an active participant in the World Economic Forum in Davos.

Since the early 2000s, she has been a leading public voice on the issue of anthropogenic climate change. Her 2004 essay “The Scientific Consensus on Climate Change” (Science 306: 1686) has been widely cited, both in the United States and abroad, and was featured in the documentary film, An Inconvenient Truth. Her 2010 book, co-authored with Erik M. Conway, Merchants of Doubt: How a Handful of Scientists Obscured the Truth on Issues from Tobacco to Global Warming, was shortlisted for the Los Angeles Times Book Prize, won the Watson-Davis Prize from the History of Science Society, and has been translated into seven languages. The film version, by the same name and produced by Robby Kenner and Participant Media, was released by SONY Classics Pictures in 2015.

Oreskes and Conway have also written The Collapse of Western Civilization (Columbia University Press, 2014), which has been a best seller in France, and has been translated into eleven languages. In 2014, Oreskes had the opportunity to meet Pope Francis at a special meeting at the Vatican on climate change and sustainability, and in 2015 wrote the introduction to the Melville House edition of the Papal Encyclical on Climate Change and Inequality, Laudato Si’.

Professor Oreskes has appeared on numerous television and radio programs, and her Ted Talk, Why We Should Trust Scientists, has over 1,120,533 views. She has lectured widely and won numerous prizes, including the 2009 Francis Bacon Medal for outstanding scholarship in the history of science and technology, the 2011 Climate Change Communicator of the Year, the 2014 American Geophysical Union Presidential Citation for Science and Society, the 2014 American Historical Association Herbert Feis prize for public history, the 2015 Geological Society of America Public Service Award, and the American Geophysical Union’s 2016 Ambassador Award. In 2017, she was inducted into the American Academy of Arts and Sciences. For her Guggenheim project, she will once again be working with Erik Conway on a book entitled, “Inventing the Magic of the Marketplace” The History of a False Idea.”