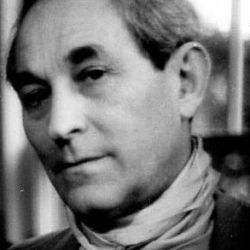 He studied political philosophy and engineering before attending the University of Munich, where he studied art history with Heinrich Wöfflin, one of the most prominent modern art historians. During World War I he lived in Norway as a refugee, working on his art and exploring principles of sculpture. He emerged after the war with the conviction that space itself was an animate entity, possessing properties that he would choose to treat in his work as a separate sculptural material. Mr. Gabo was a leading Constructivist artist, part of a group of painters, architects, and sculptors who championed applying principles of mechanical production, science, and engineering to art to create works resonating with tangible ideas and pure forms.

The birth of Constructivism is closely linked to the Russian Revolution in 1917, and Mr. Gabo returned to Russia from Norway after World War I in the hopes that the new Bolshevik leaders would prove receptive to the movement. He authored the "Realistic Manifesto" in 1920, a famous publication stating the intentions of Constructivist art. At this time Mr. Gabo also created one of the earliest examples of kinetic sculpture, a construction using a motorized wheel he titled Kinetic Composition.  In 1922, Mr. Gabo moved to Berlin, finding the Russian Soviet regime less sympathetic to his art than he had hoped, since he remained firmly wedded to principles that art should express pure and aesthetic forms rather than propaganda. He gained renown as a leading avant-garde practitioner in Weimar Berlin, home to the Dada, de Stijl, and Bauhaus movements and a thriving center of cultural activity. Mr. Gabo brought his constructivist aesthetic to a number of art forms in Berlin, ranging from kinetic sculpture to set design. He moved to Paris in the 1930s, and continued working on sculptures that incorporated industrial materials and sought to embody studies of movement and architectonic forms.  In 1946 he moved to the United States and displayed his work at a retrospective exhibition at the Museum of Modern Art in 1948.  He was awarded a Guggenheim Fellowship to work on three separate large-scale sculptures exploring principles of movement in time and space.  After moving to the United States he settled in Connecticut, and worked constructing monumental sculptures and kinetic constructions on public commission for the Baltimore Museum of Art and the Rockefeller Center in New York. He died in 1977 of cancer, at eighty-seven years of age.

Recognized as one of the leading artists of an important twentieth-century avant-garde movement, Mr. Gabo lectured on art, architecture, and construction at a number of institutions, including Harvard University, Yale University, and the Massachusetts Institute of Technology. His work has been featured in exhibitions at the Museum of Modern Art and the Whitney Museum of American Art in New York, the Art Institute of Chicago, and the Henry Moore Institute in Leeds, England. In 1971, he received an honorary knighthood from the Queen of England, and was also a member of the National Academy of Arts and Letters and a recipient of the American Art Institute’s Logan Medal. His work can be found in the collections of the Tate Britain, the Tate Modern, and the Courtauld Institute in London, the Solomon R. Guggenheim Museum and the Museum of Modern Art in New York, and the Philips Collection in Washington, D.C.