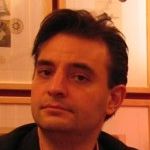 Pablo Helguera (born in Mexico City in 1971) is a New York–based artist working with installation, sculpture, photography, drawing, and performance. Considering the relationship between history, cultural production, and language, Mr. Helguera fictionalizes the real, generating commentary and discussion about our surrounding cultural reality and our relationship to time. His work often adopts the format of the lecture, museum display strategies, musical performances, and written fiction.

His work as an educator intersects his interest as an artist, and his work often reflects on issues of interpretation, dialogue, and the role of contemporary culture in a global reality. This intersection is best exemplified by his current project, The School of Panamerican Unrest, a nomadic think-tank that physically crosses the continent by car from Anchorage, Alaska, to Tierra del Fuego, making forty stops along the way.

Mr. Helguera’s work is part of the permanent collection of El Museo del Barrio, New York, an institution where he has presented a variety of projects through the years.

Pablo Helguera performed individually at the Museum of Modern Art/Gramercy Theater in 2003, where he showed his work Parallel Lives. His first musical composition Endingness was performed in New York by the Mexican-American Orchestra. He has exhibited or performed at venues such as the Royal College of Art, London; 8th Havana Biennal, PERFORMA 05, Havana; Shedhalle, Zurich; P.S.1 Contemporary Art Center, New York; Brooklyn Museum; IFA Galerie, Bonn; Tokyo Metropolitan Art Museum, Tokyo; MALBA museum in Buenos Aires, Ex-Teresa Espacio Alternativo in Mexico City, The Bronx Museum, Artist Space, and Sculpture Center. His work has been reviewed in Tema Celeste, Art in America, Artforum, NY Arts Magazine and ArtNews, among others. He was the recipient of a 2005 Creative Capital Grant.

Mr. Helguera worked for fifteen years in a variety of contemporary art museums, most recently as head of public programs at the Education Department of the Guggenheim Museum in New York, where he organized close to 500 public events and worked in the development of nearly thirty exhibitions. Since 2007, he has been Director of Adult and Academic programs at the Museum of Modern Art, New York.

He is the author of four books: Endingness (2005), an essay on the art of memory; The Pablo Helguera Manual of Contemporary Art Style (2005, Spanish edition; 2007, English edition), a social etiquette manual for the art world; The Witches of Tepoztlán (and other Unpublished Operas) (2007), and The Boy inside the Letter (2008). Upcoming publications include Theatrum Anatomicum (and other performance lectures) and The Rhetoric of Contemporary Art.

Photograph from The Seven Bridges of Königsberg, presented in New York City, October 2008.