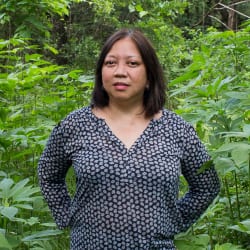 Ramona Diaz is an Asian-American filmmaker best known for her compelling character-driven documentaries that combine a profound appreciation for cinematic aesthetics and potent storytelling. Ramona’s films have demonstrated her ability to gain intimate access to the people she films – be they rock stars, first ladies, dissidents, or teachers – resulting in keenly observed moments and nuanced narratives that are unforgettable. She has received funding from major agencies such as Corporation for Public Broadcasting, ITVS, Center for Asian American Media, the Tribeca Film Institute, the Sundance Documentary Fund, Ford Foundation, the Catapult Fund, and Chicken and Egg.

Ramona’s film credits include Spirits Rising, an hour-long documentary about women’s role in the 1986 People Power revolution in the Philippines. Spirits Rising received a Student Academy Award, the Ida Lupino Director’s Guild of America Award, a Golden Gate Award from the San Francisco International Film Festival, and a Certificate of Merit from the International Documentary Association.

Ramona’s first professional film, Imelda, a full-length documentary about the former First Lady of the Philippines, garnered the Excellence in Cinematography Award for documentary at the 2004 Sundance Film Festival and the ABC News Videosource Award from the International Documentary Association. The film was released theatrically in the United States (with a premiere at the prestigious Film Forum in NY) and the Philippines, screened in over fifty film festivals around the world (including IDFA, Berlin, Pusan, Thessaloniki, Valladolid, and Sydney among others), and it was broadcast nationally on Independent Lens on PBS in May 2005.

Ramona’s second PBS film, The Learning, is a documentary film that follows several Filipino teachers in Baltimore City across two school years, chronicling the sacrifices they make as they try to maintain a long-distance relationship with their children and families, and begin a new one with the mostly African-American students whose schooling is now entrusted to them. The film was nominated for a Humanitas Award by the International Documentary Association and was part of POV’s 24th season on PBS.

Ramona’s latest film, Don’t Stop Believin’: Everyman’s Journey is a feature-length documentary film about Filipino singer Arnel Pineda who is plucked from YouTube to front the iconic American band Journey and the pressures of replacing a legend while leading the band on their longest world tour in ages. The film premiered at a gala screening at the 2012 Tribeca Film Festival, was the closing night film of the San Francisco International Film Festival and the opening night film of 2012 Silverdocs Film Festival. It won audience awards at the Traverse City FF, New Hampshire FF, Palm Springs amongst others. It was the opening film for PBS’ Indie Showcase, presented by Independent Lens and POV, in September 2013. The film was chosen to participate in the American Film Showcase. It won the 2014 Independent Lens Audience Award.

Ramona is currently finishing Motherland, a film that takes us into the heart of the planet’s busiest maternity hospital in one of the world’s poorest and most populous countries: the Philippines.

Ramona was chosen for the inaugural CBP/PBS Producers Workshop at WGBH in 2000 and took part in the prestigious Sundance Institute’s Documentary Edit and Story Lab with The Learning and was designated a Sundance Fellow in 2011. Four of Ramona’s feature length documentaries have been invited to participate in IFP’s annual Independent Film Week in New York City. In addition, Ramona’s films are required viewing in numerous top tier Asian studies, gender studies, and humanities programs across the country.

Besides producing and directing films, Ramona is an active member of the independent documentary community. She was invited to participate in POV’s Editorial Committee in 2012 and has sat on numerous funding panels and review committees including ITVS’ Open Call in 2005 and 2011, Pacific Islanders’ In Communication from 2014 to 2015, the Greater Baltimore Cultural Alliance in 2014, and Docs In Progress’ Filmmaker-In-Residence in 2015.

For the past three years, Ramona has served as a film envoy for the American Film Showcase, a joint program of the US Department of State and the USC School of Cinematic Arts that brings American films to audiences worldwide. She has conducted master classes and production and post-production workshops all over the world including in Iraq, Laos, Morocco and Northwestern University in Doha, Qatar.

Ramona was recently awarded a Fellowship by the Bogliasco Foundation; she was in residence at the Bogliasco Study Center in Italy in the autumn of 2015 where she began writing her first screenplay.

Beyond filmmaking, Ramona is also an active member of her communities, both in the city she lives in and within the larger Filipino-American diaspora. She was one of The Baltimore Sun’s 50 Women to Watch in 2013 and recently received the 2015 100 Most Influential Filipino Women in the World Award in the Innovator and Thought Leader category from the Filipina Women’s Network.

Ramona is a graduate of Emerson College and holds an MA in Communication from Stanford University.

Follow this link to view Director’s Reel on vimeo.