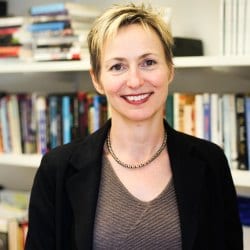 As Associate Professor of Women’s, Gender, & Sexuality Studies at Barnard College, I teach and research at the busy intersection of science and social differences. In all of my work, I simultaneously explore epistemological questions about how we know what we know, the significance of scientific practice for lived experience, and the reciprocal relations between science and the social hierarchies of gender, sexuality, class, and race. I am a core member of the International Neurogenderings Network, a group devoted to bringing critical gender analyses to bear on and increasingly in neuroscience. I have also been a visiting scholar at the International School for Advanced Studies (SISSA), Cognitive Neuroscience Sector (Trieste, Italy); the Janet Prindle Institute for Ethics, DePauw University; and a Visiting Professor at the Institute for Gender Studies, Radboud University (the Netherlands). From 2012-2015, I was honored with a Tow Professorship for Distinguished Scholars and Practitioners at Barnard College.

As an interdisciplinary feminist scientist, I am equally at home with biological literatures (especially in endocrinology and neuroscience) and cultural and historical studies of science and medicine. A Ph.D. in Sociomedical Sciences from Columbia University) gave me formal training in epidemiology, biostatistics, measurement theory, and research design; for nearly 20 years, I’ve pursued additional training with mentors and collaborators in fields that range from cognitive and development neuroscience, developmental biology, and physical chemistry to cultural anthropology, political science, history, and sociology. I also have an AB in political science from Bryn Mawr College.

I am intrigued (which is to say, obsessed) with testosterone: its diverse physical capacities, its rich social life under the guise of “the male sex hormone,” and the way these two realms co-produce knowledge about this overburdened steroid. Since graduate school, I’ve been hooked on T – I follow it everywhere, and have found that it’s a great medium for studying the complex entanglements of bodies (at multiple levels including chemicals, cells, synapses, processes, organ systems, and more), behaviors, scientific practices, beliefs, and large-scale cultural formations (such as gender, sexuality, and race, to name the most obvious). My current research NSF-funded research traces “Divergent Models of Testosterone Functioning.” Based on this work, I am writing T: The Unauthorized Biography (under contract with Harvard University Press). Both the research and the book are collaborations with Katrina Karkazis (Stanford University). Our collaborations began in 2011, when we teamed up to challenge both the ethics and the science underlying new rules that restrict women athletes with naturally high testosterone levels from elite competition.

My book Brain Storm: The flaws in the science of sex differences (Harvard University Press 2010) takes on the evidence that early exposure to steroid hormones, especially testosterone, permanently shapes the human brain for masculine or feminine patterns of gender and sexuality. The book won a Distinguished Book Award from the Association for Women in Psychology (2011), and was reviewed positively in three-dozen scholarly and popular publications that ranged from Science to History of Biology to my personal favorite, Elle magazine. The French translation is forthcoming (Belin, 2016).

My articles have appeared in Science, Nature, BMJ, American Journal of Bioethics (AJOB), Frontiers in Human Neuroscience, Trends in Cognitive Sciences, The American Journal of Public Health, Neuroethics, Social Science and Medicine, S&F Online, and other scholarly journals as well as popular outlets like The New York Times, Discover Magazine, The Guardian, and New Scientist.

My work has been supported by Fellowships and grants from the American Council of Learned Societies; the National Science Foundation; The Social Science Research Council; the Royal Dutch Academy of Arts and Sciences; the Brocher Foundation; the National Center on Minority Health & Health Disparities; the National Institute on Drug Abuse; the Foundation for Veteran, Worker, and Environmental Health; the Columbia University Center for the Study of Social Difference; and by a Barnard College Presidential Research Award.