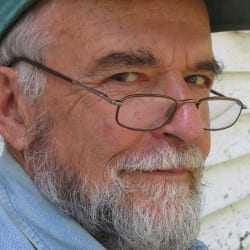 Robert Finch was born in 1943 in North Arlington, New Jersey, a town featured in the opening credits of The Sopranos. When he was twelve, he moved with his family to Parkersburg, West Virginia. His first writing job was writing obituaries for The Parkersburg Sentinel. His work has been preoccupied with mortality ever since.

Today Robert Finch is widely regarded as one of America’s leading nature essayists. When his first book, Common Ground: A Naturalist’s Cape Cod (Godine, 1981) was published, The New York Times wrote, “In these compassionate, quietly provocative essays, Mr. Finch makes an eloquent case for dealing with nature not just as an extension of ourselves but as a world apart.” His eight subsequent essay collections have garnered similar praise. Yet Robert Finch did not set out to be a “nature writer.” Rather, his work has sprung largely from a deep love of the place he has called home for the past half-century – Cape Cod – and an enduring desire to understand its hold on him. As he puts it, “What holds my interest as a writer is not the natural world itself, but rather the intersection of nature and human nature – what it is like to be alive and sentient in a physical universe.” One of his ongoing preoccupations as a writer has been nature as the source of human language and thought.

In 2001 Robert Finch and his wife, Kathy Shorr, bought an old house in the Newfoundland outport of Squid Tickle, where they spent the next 15 summers. In 2007 he published The Iambics of Newfoundland: Notes from an Unknown Shore (Counterpoint), which the Globe and Mail listed as one of their 100 Best Books for that year.

His essays have appeared in numerous magazines and journals and his books have been translated into Japanese and Chinese. For his body of work he was named as one of the New England Literary Lights for 1999 by the Associates of the Boston Public Library, and in 2001 he received the Non-Fiction Award from the New England Booksellers Association.

In addition to his own work, he is (with John Elder) co-editor of The Norton Book of Nature Writing, (W.W. Norton, 2002), an anthology that has been used in over 100 colleges and universities. His weekly radio commentary, A Cape Cod Notebook, has been broadcast since 2005 on WCAI, the Woods Hole NPR affiliate, for which he has twice received the prestigious Edward R. Murrow Award for Radio Writing.

In 2012 passages from his essay, “North Beach Journal,” were used as the text for A Chatham Rhapsody, a chorale composition by Boston composer William Cutter, which was performed by the Chatham Chorale for that town’s Tercentennial celebration.

Mr. Finch has taught at numerous colleges and writers conferences, including Williams College, Emerson College, Carleton College, Penn State, the Provincetown Fine Arts Work Center and the Bread Loaf Writers Conference. From 2002-2012 Mr. Finch was on the nonfiction faculty of the MFA in Writing Program at Spalding University, Louisville, Kentucky.

He lives in Wellfleet with his wife, Kathy Shorr.