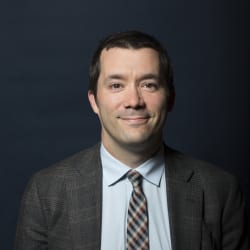 Thomas S. Mullaney is a professor of Chinese history at Stanford University where, since joining the faculty in 2006, he has authored two full-length research monographs, and has served as lead editor on five edited volumes and special issues.

His first book, Coming to Terms with the Nation: Ethnic Classification in Modern China (University of California Press, 2010), charted the history of China’s 1954 Ethnic Classification project (minzu shibie), a joint social scientific-Communist state expedition wherein a group of linguists, ethnologists, and Party cadres traveled to the most ethnically diverse province in the People’s Republic of China to determine which minority communities would and would not be officially recognized by the state. The Classification gave rise to the central axiom of modern Chinese ethnopolitics, that the People’s Republic is a “unified, multiethnic country” made up of precisely fifty-six groups: the Han majority plus fifty-five minorities. My book is the first to chart out how this axiom came into being.

Coming to Terms attracted widespread attention among historians and anthropologists of China, as well as philosophers of science and theorists of the nation-state—including the celebrated author of Imagined Communities, Benedict Anderson, who wrote the foreword. Ian Hacking, philosopher of science and former Chair of Philosophy and History of Scientific Concepts at the Collège de France, called Coming to Terms “the most brilliant study yet of how nationality, or ‘ethnicity’, is created.” In 2011, the book was awarded the American Historical Association Pacific Branch Award for “Best First Book in Any Historical Subject.”

His second book, The Chinese Typewriter: A History (MIT Press, 2017), is the first full-length history of China’s modern, nonalphabetic information infrastructure, encompassing telegraphy, typewriting, word processing, and computing. Based on a multilingual body of archival, oral historical, and material object sources from fifty-five archives, museums, and private collections in China, Taiwan, Japan, the United States, Italy, Germany, France, Denmark, Sweden, and the United Kingdom, The Chinese Typewriter situates the much maligned and misunderstood technology of Chinese typewriting within the broader history of China’s nineteenth- and twentieth-century development of a non-alphabetic, character-based information infrastructure encompassing telegraphy, typewriting, word processing, computing, and more. During China’s clash with Euro-American imperialism, the Chinese language became entangled within a novel global information order based upon alphabet-centered technologies such as the telegraph and typewriter. Owing to the non-alphabetic Chinese script, Chinese reformers could not hope to “adopt” or “transfer” such technologies in any straightforward way. Instead, even the most basic functionality of technolinguistic systems such as Chinese telegraphy and typewriting required inventors, manufacturers, and users to subject the Chinese language itself to unprecedented forms of reconceptualization.

The Chinese Typewriter has also elicited a vibrant response, including features in the London Review of Books, the BBC, New Scientist, the Los Angeles Times, Wall Street Journal, Nature, and more. Ai Weiwei praised it as a “fascinating and extensive study into the characteristics of the Chinese language.” Wang Hui, one of China’s foremost intellectual historians, called it a “fascinating” work which “brings a completely different interpretation of nonalphabetic Chinese and the modern fate of Chinese culture.” Leading media historian Lisa Gitelman praised it as “lucidly written and brilliantly conceived.” In the words of Chinese conceptual artist Xu Bing, creator of Book from the Sky (Tianshu): “Mullaney reveals a topic I have always attempted to investigate through my art.”

Mullaney is currently completing the sequel to this work, entitled The Chinese Computer: A History (forthcoming on MIT Press). As the first-ever history of Chinese computing in the 20th and 21st centuries, this book will explore the circuitous pathways and eccentric personalities of this unknown chapter in the history of global information technology. Drawing upon extensive oral histories, material artifacts, and archives from Asia, Europe, and the United States, the book charts out the pursuit of Chinese computing from its inception in the early Cold War period; its pathway through a network of American academic and military outfits that included MIT, the CIA, the U.S. Air Force, the U.S. Army, the Pentagon, the RAND Corporation, and the Graphics Arts Research Foundation; to its development within a burgeoning network of Chinese, Taiwanese, and Japanese computer scientists from the 1970s onward.

Mullaney’s Guggenheim project is entitled Hot Metal Empire: Type Design, Script, and Colonialism in Asia, Africa, and the Middle East, a monograph on the global history of Non-Latin typography and type design in the modern era.

Mullaney’s writings have appeared in the Journal of Asian Studies, Technology & Culture, and Modern Chinese Language and Culture, among others. He has also written and lectured extensively for the broader public, with essays appearing in The Atlantic, Foreign Affairs, Foreign Policy, and in invited lectures at Google, Microsoft, Adobe, the Unicode Consortium, and more. He is also Curator of the museum exhibit, Radical Machines: Chinese in the Information Age, which has been covered extensively in the global media, including Sing Tao, World Journal, the BBC, Los Angeles Times, and beyond. The show is now on tour with shows scheduled in New York, San Francisco, Hong Kong, and elsewhere.

Mullaney is also the founding director of Digital Humanities Asia (DHAsia), an initiative at Stanford University focused on South, Southeast, East, and Inner/Central Asia. At the same time, Stanford University Press will soon publish Mullaney’s peer-reviewed, born-digital DH volume, The Chinese Deathscape, which examines the phenomenon of grave relocation in late imperial and modern China—a campaign that has led to the exhumation and reburial of 10 million corpses in the past decade alone and has transformed China’s graveyards into sites of acute personal, social, political, and economic contestation. He is also the Founder and Editor-in-Chief of Dissertation Reviews, which published more than 500 reviews annually of recently defended dissertations in nearly 30 different fields in the Humanities and Social Sciences.

Mullaney has been the recipient of multiple awards, prizes, and fellowships. These include the Andrew W. Mellon New Directions Fellowship, a National Science Foundation 3-Year Grant (Science, Technology and Society Award), the American Historical Association Pacific Branch Award for “Best First Book on Any Historical Subject,” the Society for the History of Technology Abbot Payson Usher Prize, and on two occasions, the ACLS/Chiang Ching-kuo Foundation “Comparative Perspectives on Chinese Culture and Society” Award, among others.