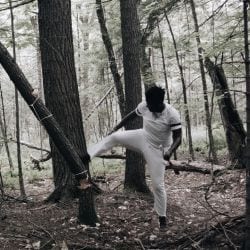 McClodden’s work explores shared ideas, values, and beliefs within the African Diaspora, or what she calls, “Black mentifact”. She is interested in Blackness and traversing nostalgia; and how the past, present, and future can intersect visually and thematically within time based work and is invested in exploring intersubjectivities within Black communities as a tool for creating insider perspectives within film, time based works, and objects.

McClodden has exhibited and screened work at the Institute of Contemporary Art-Philadelphia, Museum of Modern Art, Whitney Museum, MOCA LA, Art Toronto’s VERGE Video program, MCA Chicago, MOMA PS1, New York, Museum of Contemporary Art, Cleveland; Kansai Queer Film Festival in Osaka and Kyoto, Japan; and the London Lesbian and Gay Film Festival, among others in a range of international film festivals and film programs. Her work will be featured in the 2019 Whitney Biennial curated by Jane Panetta and Rujeko Hockley.

McClodden has been awarded the 2018–19 Keith Haring Fellow in Art and Activism at Bard College, the 2017 Louis Comfort Tiffany Foundation Award and the 2016 Pew Fellowship in the Arts in Philadelphia, PA. She attended the 2016 Sommerakademie Zentrum Paul Klee as a nominated fellow, and attended the 2015 Flaherty Film Seminar as a Philadelphia Fellow.

McClodden curated the traveling exhibitions A Recollection. + Predicated. featured within Julius Eastman: That Which is Fundamental, an interdisciplinary, retrospective project that examined the life, work, and resurgent influence of composer and pianist Julius Eastman.