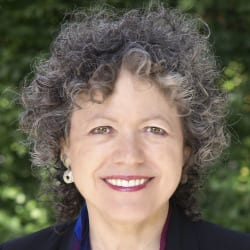 Vivien A. Schmidt is Jean Monnet Professor of European Integration and Professor of International Relations and Political Science in the Pardee School at Boston University, where, until 2017, she served as the Founding Director of its Center for the Study of Europe.

Professor Schmidt’s scholarly research is situated at the intersection of political theory, comparative politics, and international relations. Her comparative work focuses on the changing nature of European politics and economics in a globalizing world, her theoretical work on the role of ideas and discourse in the dynamics of change. In her Guggenheim project on the “rhetoric of discontent,” she extends her interests to the US in a transatlantic investigation of the populist revolt against globalization (and Europeanization).

Schmidt is the author or editor of over a dozen books, including: Democracy in Europe, named by the European Parliament as one of the ‘100 Books on Europe to Remember;’ Resilient Liberalism in Europe’s Political Economy; The Futures of European Capitalism; Democratizing France; and the forthcoming Europe’s Crisis of Legitimacy, on the dilemmas of Eurozone governance. Her epistemological work on “discursive institutionalism,” which explores the ideational and discursive processes in comparative politics, has informed her books as well as articles published in the Annual Review of Political Science, the European Political Science Review, and other journals.

Schmidt has been awarded an honorary doctorate from the Free University of Brussels, a Rockefeller Foundation Bellagio Center Residency, a Belgian Francqui Foundation Chair, and Fulbright Fellowships in France and the UK. She is past head of the European Union Studies Association and sits on numerous editorial and advisory boards, including the Wissenschaftszentrum Berlin, the Brussels Foundation for European Progressive Studies, the Vienna Institute for Peace, and the Sheffield Political Economy Research Institute.

Schmidt is also an accomplished fine art photographer who has exhibited widely. (See her photo website)