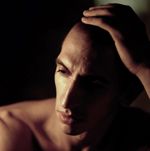 Omar Carrum was born in Mexico City in 1973. He began his formal dance training in 1990 at the Estudio Profesional de Danza Ema Pulido and in 1992 he became a founding member of the internationally touring dance company, Delfos Danza Contemporánea, where he continues his career as a dancer and choreographer today. He has