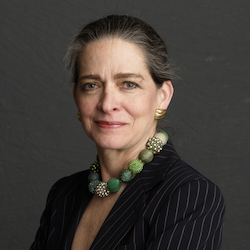 From 1988-2013, Adele Chatfield-Taylor served as President and CEO of the American Academy in Rome. Since then she has been President Emerita.

The Academy is a center for independent study and advanced research in the fine arts and humanities. Every year, through a competition open to all United States citizens, the Academy awards up to thirty Rome Prize Fellowships in the following subjects: architecture, landscape architecture, design, historic preservation and conservation, visual arts, music, literature, and ancient, medieval, Renaissance, and modern Italian studies. The mission of the Academy is to select and support this population as they do innovative work and live together in a dynamic international community.

Ms. Chatfield-Taylor, a Virginian, has lived and worked in New York (or part-time in Washington) since 1967, as a professional historic preservationist and not-for-profit arts administrator. In 1973, she joined the staff of the New York City Landmarks Preservation Commission where she served in various capacities until 1980, when she established and became Executive Director of the New York Landmarks Preservation Foundation. She was an Adjunct Assistant Professor of Architecture at Columbia University in the Graduate School of Architecture, Planning and Preservation from 1976-1984.

From 1984-88, she was Director of the Design Arts Program for the National Endowment for the Arts in Washington, which supported projects in all areas of design through grants and advocacy activities, including the first Mayors Institute for City Design. She was Vice-Chairman of the Policy Panel for the Design Arts Program of the National Endowment for the Arts from 1978-82. She has been a member of numerous boards having to do with the arts and preservation, including Preservation ACTION, the National Alliance of Preservation Commissions, the US/International Council on Monuments and Sites, the International Design Conference in Aspen, the Center for Building Conservation, the Architectural History Foundation, the Spoleto Festival, the National Building Museum, the Jeffersonian Restoration Advisory Board at the University of Virginia, the Tiber Island History Museum, the Editorial Advisors of the American Institute of Architects Press, the California Institute for the Arts, the National Trust for Historic Preservation, The Thomas Jefferson Foundation at Monticello, the Institute for Classical Architecture and Art, and the Presidio Council in San Francisco; she was a member of the U.S. Commission of Fine Arts in Washington from 1989-94, and has been an advisor to the architecture schools at Yale, Harvard, Princeton, the University of Virginia, and the University of Miami. She is an honorary member of the American Society of Landscape Architects. She is presently a Trustee of the 564 Park Avenue Historic Preservation Foundation and the John Simon Guggenheim Memorial Foundation.

Ms. Chatfield-Taylor received a B.A. from Manhattanville College, and an M.S. from the Graduate School of Architecture (later Graduate School of Architecture, Planning and Historic Preservation) at Columbia University. She was a Loeb Fellow at the Harvard Graduate School of Design, a Rome Prize Fellow at the American Academy in Rome, and a Fellow of the New York Institute for the Humanities; she was elected a Fellow of the American Academy of Arts and Sciences in 1996. In 2002, she received the highest civilian award to a non-Italian by the President of the Republic of Italy (“Grand Officer of the Ordine al Merito”) for “doing the unthinkable – making Rome more beautiful through the historic preservation of the American Academy in Rome.” In 2004, she received the Award for Stewardship Excellence, from the Cultural Landscape Foundation, and the Gold Medal from the National Institute for Social Sciences. In 2010, the National Building Museum awarded her the twelfth Vincent Scully Prize in recognition of exemplary practice, scholarship, or criticism in architecture, historic preservation, and urban design. In 2014, she was awarded the Placekeeper Award by the Foundation for Landscape Studies, the Distinguished Service to the Arts Award by the American Academy of Arts and Letters, and an Honorary Doctorate of Fine Arts from the American University of Rome. From 2017 through October 2020, she served on the United States Department of State and Cultural Affairs Cultural Property Advisory Committee.

Ms. Chatfield-Taylor joined the Board in 2019.