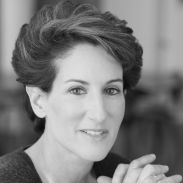 Stacy Schiff won the 2000 Pulitzer Prize in biography for Véra (Mrs. Vladimir Nabokov). She is the author as well of Saint-Exupéry, a finalist for the Pulitzer Prize, and A Great Improvisation: Franklin, France, and the Birth of America, awarded the George Washington Book Prize and the Ambassador Award in American Studies. Winner of the PEN/Jacqueline Bograd Weld Award in biography, her Cleopatra: A Life, was published to ecstatic reviews in 2010. Both Cleopatra and Schiff’s most recent book, The Witches: Salem, 1692 were #1 bestsellers.

Praised for her meticulous scholarship and her witty style, Schiff has written for, among other publications, The New Yorker, The Washington Post, and The New York Review of Books and has contributed frequently to The New York Times op-ed page and The New York Times Book Review. A recipient of a fellowship from the National Endowment for the Humanities, she is a past fellow at the Cullman Center for Scholars and Writers at the New York Public Library. Schiff was the recipient of a 2006 Academy Award in Literature from the American Academy of Arts and Letters and was honored as a 2011 Library Lion by the New York Public Library. Named a Chevalier des Arts et Lettres by the French Ministry of Culture, she was inducted into the American Academy of Arts and Letters in 2019. Schiff is a graduate of Williams College, from which she holds an honorary doctorate. A 1996 Guggenheim Fellow, she joined the Foundation’s board in 2013. Photograph by Elena Seibert.